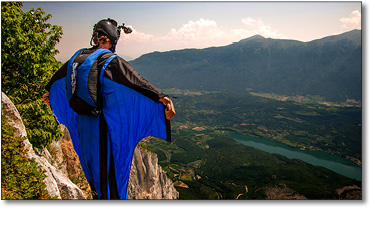 A few of weeks ago, I spent the day at a Southern California amusement park. Temperatures soared above 100 degrees as we trudged miserably around the park. I was feeling the early effects of heat stroke when I came to realize, through my sweat-filled eyes, that Americans are crazy for cheap (and not-so-cheap) thrills – happiness through instant gratification. After finding a cold drink and a rare piece of shade, I watched as three young men, strapped together in a safety harness, were hoisted by bungee cord over 150 feet in the air from a metal superstructure. After several agonizing seconds, they were released from the apex as momentum from the fall swung them out over the cheering crowd at 60 miles per hour. In other areas, park guests were waiting in slow-moving lines for hours in the stagnant heat simply to experience a few exhilarating minutes on a rollercoaster.

We have become a society of adrenaline junkies, willing to push our relatively fragile bodies as well as physics and engineering to their limits in order to feel that elusive chemical rush in the brain. Many have become so thrill-addicted and blinded to common sense and physical limitation that their severe acts have lead to their own demise.

The current pinnacle of extreme athletics is BASE jumping. An off-shoot of skydiving, the treacherous activity has gained in popularity and morphed into an international sport of high acclaim and equaled infamy. Men and women in winged jumpsuits are flying off mountain tops, buildings and bridges, through the sky, negotiating dangerously narrow gaps among cliffs and rock formations, hugging the rugged landscapes at over 100 miles per hour before deploying a parachute as they land safely back on earth. However, many are not landing safely back on earth.

As of September, 20 notable wingsuit flyers have perished in 2016 as a result of injuries sustained while BASE jumping. This is a disastrous year for the international sport which boasts thousands of participants on six continents.

While extreme sport enthusiasts continue to push the boundaries of practical safety margins, some insurance underwriters are willing to financially mitigate many of these seemingly insane risks.

Earlier this year, a case was brought to our attention in which a production company was seeking high-limit accidental death insurance to cover a BASE jumping stunt that was to be filmed for a national commercial. The stunt involved two experienced wingsuit flyers who were to jump from a mountain precipice in the French Alps and soar through the mountain range fewer than 50 feet off the rock surface.

After a thorough analysis of the case, Petersen International was able to provide the production company with the necessary accident insurance including coverage for the many preceding practice jumps.

Fortunately, the rehearsal stunts as well as the culminating, televised jump were executed without incident. Although the risks taken by these daredevils are sometimes beyond belief, proper financial protection is available for extreme sports athletes through Petersen International. Call us for a quote at (800)345-8816.