The Bridge Plan, a major medical insurance platform catering to U.S. residents awaiting Medicare eligibility.  It has faithfully served as the go-to gap healthcare product for persons aged 60 years and older who are not yet eligible for Medicare or who have missed their Medicare enrollment window.  The product has also been the perfect solution for those who have immigrated to the U.S. and have yet to establish residency or have been permanent residents for fewer than five years and are still not eligible for Medicare.

The Bridge Plan is not compliant with the Affordable Care Act.

There are 3 conditions for which the Bridge Plan is used as a temporary substitute:

Medicare Restriction #1: Medicare will accept people who have been a permanent resident of the United States for at least five years. This does not require citizenship or any payment into Social Security prior to eligibility. The only requirement is that they must pay a premium to have both Part A and Part B.

Petersen’s Solution #1: The Bridge Plan is available to persons who have become permanent residents of the United States and who are within the five year waiting period for Medicare eligibility.

Medicare Restriction #2: Some people may be eligible for Medicare due to age and qualifications, but have failed to enroll. Enrollment is not automatic. Social Security does not remind people to enroll. If they miss their enrollment period they must wait to enroll at a later date. This may be as much as 18 months later!

Petersen’s Solution #2: The Bridge Plan will cover them with benefits similar to Medicare on a temporary basis until the next enrollment opportunity.

Medicare Restriction #3: Some people, for various reasons, have only Part A or Part B. They may be able to get the additional part through Medicare, but at a later date.

Petersen’s Solution #3: The Bridge Plan may be sold with both Part A and Part B, just Part A, or just Part B. 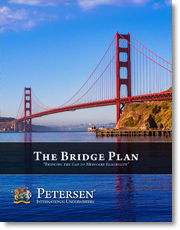