Advice from a Route 91 Survivor 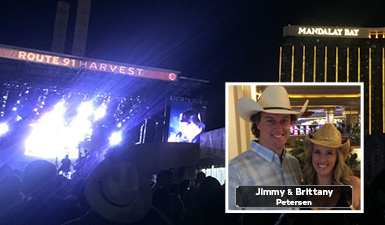 It has been nearly a year since the tragic events of the Route 91 Music Festival in Las Vegas, Nevada, and as a survivor of the shooting, I am without a doubt, a changed man. Although I continue to struggle with many negative effects from the event, such as being nervous in crowded areas, getting far too startled by smoke alarms, and initially panicking at the sound of fireworks, the overall changes I have recognized in myself have been for the better, and my life has been much more fulfilling ever since that fateful day.

Through a series of miraculous events, our entire group of eight made it home safely and uninjured. As many of you know, the shooting occurred on the last night of the music festival. After a long day at the pool, half of our party decided to retire early and returned to the hotel, leaving just four of us at the event. In the minutes leading up to the beginning of the shooting, we decided to leave our spot near the front right of the stage and grab a bite to eat at the food court, which was setup at the back of the venue. On our way back to the main stage, we were stopped by a woman who offered us free VIP drink tickets that she wasn’t going to use. As with any event, the second longest line after the bathroom was the drink line, so our wives decided to find somewhere to sit.

Not long after we paired back up, we heard some pyrotechnics from the direction of the main stage so we looked up to see the fireworks explode above the stage, but nothing came. Moments later, filtering through the crowd was a woman whose face will forever be etched into my mind. She was running for her life, and the sheer panic on her face sent my adrenaline to a level twelve. Grabbing our wives by the hand, we turned and started to run just as the second burst of gunshots rang out. At a full sprint, we quickly made our way out of the venue with the heroic help of event staff who led us out the back street parallel to the Vegas Strip. The large church across the street funneled everyone down the road to the back of the Tropicana Hotel. We found a service entrance that looked to be out of a horror movie, and we gladly went down it to shield ourselves from the bullets.

After making our way towards the Tropicana casino amongst a sea of people, we heard someone scream “ACTIVE SHOOTER!” as everyone turned around and ran toward the back of the hotel. We decided to break from the crowd and exited the Tropicana Hotel via the pool deck and made it to a side street, which took us to the Hooters Hotel. Just before entering the Hooters Hotel, the shooter unloaded another magazine and it sounded as close as ever. We ran through the back entrance and into the service area once again. As we made our way to the casino, we again heard someone screaming “ACTIVE SHOOTER!”, and we quickly ran back into the kitchen area. We knew our chances would improve significantly if we could find shelter on a higher floor, so we rode a service elevator up a few floors with a full car of terrified passengers.

We all unloaded into the hallway on the fourth floor, hopeful that it was high enough to improve our chances of survival, but not too high in the event we had to evacuate once again. We started knocking on doors and finally one opened to a group of four German guys who were watching soccer in their underwear – none of whom spoke any English. Eighteen people rushed into the room with us, and we quickly locked and barricaded the door, closed the blackout curtains, shut off the TV, made makeshift weapons and guarded the door, fearing the attackers were following us.

The room fell silent except for a few whimpers of crying. We contacted our family via text message and let everyone know we were okay before our phone batteries died. For the next few hours, everyone sat in the darkness in complete silence. As the adrenaline wore off, I experienced an uncontrollable shivering that lasted for about 20 minutes. Never in my wildest dreams would I have thought the floor of a Hooters Hotel room would bring me such comfort.

When I returned home, I began making improvements in my life. I found exercise to be a great stress relief and lost 40 pounds and got into the best shape of my life. I signed-up as a first-time coach for my daughter’s soccer team because she has been asking me to coach for years. I stopped procrastinating on getting my Living Trust up to date, I started taking horseback riding lessons with my wife (way out of my comfort zone), I became that much more driven at work, and I updated my home security to make sure my family will be safe if anything happens at home.

However, it wasn’t until after I read my brother-in-law Robert Clark’s “Finding My Why” article that I realized how much I have changed as a result of that terrible night. When the first shots rang out, my primary objective was to protect my wife and to get us to safety so that our three children would be taken care of. Now that more time has passed, it must be the survivor’s guilt that drives me to be a better person. Why was I one of the lucky survivors and not one of the 58 killed or over 850 injured? That question propels me to ensure the gift of time I’ve been given does not go to waste.

Nobody thinks it can happen to them, until it does.

As an insurance advisor, it’s important to fulfill this mission personally, but perhaps even more critical is our obligation to our clients who rely on us as their advisor, their consultant, and their friend. We often get bogged-down with urgent work that must be done today despite the much more important items we know need to be addressed. We all have things that have been pushed-off and delayed, and it’s common for disability insurance to fall into this category. Be the advisor who educates their clients before it’s too late. Clients will never call you because they’re concerned about their disability insurance…and if they do, it’s most likely already too late.

Make sure your family, friends, and clients are protected if something should happen. Stories of life-changing moments are critical for everyone to hear; find a story that your clients can relate to and show them how important insurance is.

The time you have now is something you can never get back, and tomorrow is not guaranteed. Take the first step today towards a fulfilling life, whether that entails a new fitness regiment, educating a client/friend on their insurance needs, spending more quality time with your children, starting a new project, or even a new business. Don’t let time slip through your fingers. Fear regret, not failure!

P.S. To the guardian angel that gave me the VIP drink tickets, THANK YOU for saving our lives!