Catastrophe on the High Seas 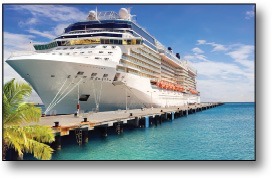 Cruise ships of today are like floating cities, comfortably carrying thousands of passengers and crewmembers to exotic locales by way of the planet’s oceans and rivers.  It is estimated that over 22 million people worldwide will travel by cruise line in 2015.  Of those, 12 million are Americans.  Combine that with an annual industry growth rate of roughly 6.55% and you have the makings of a very steady market and a vast potential client base of vacationers who are in need of an array of insurance products.

Cruise lines put enormous numbers of travelers in relatively close proximity for lengthy durations under semi-enclosed conditions, allowing for illness and communicable disease to run rampant among the passengers and crew of these mighty ships.  Aside from rare disasters like the 2012 sinking of the Italian boat Costa Concordia, the more prevalent dangers of cruising come in the form of passenger sickness and injury.  Such phenomenon is illustrated by the recently publicized outbreaks of Norovirus, a gastrointestinal disease which has crippled many voyages over the last three years.

According to the U.S. Centers for Disease Control and Prevention (CDC), up to 11% of all conditions reported to cruise ship infirmaries are considered urgent or emergencies and most situations are addressed, treated and managed onboard.  However, in some instances emergency medical evacuation off the ship to a land-based facility is necessary.

Take the case of a recent cruise passenger: a woman in her late 60’s was sailing the Mediterranean with her husband when she suffered a massive heart attack while at sea.  She was rushed by helicopter to a hospital in a nearby port of call.  Sadly, she passed away shortly after arriving at the hospital and her body was eventually flown back to the U.S. for burial.  She and her husband had fortunately purchased travel medical insurance before that fateful voyage as her family’s grief was not compounded by the additional burden of the expenses incurred by her emergency medical transportation, hospitalization and the repatriation of her remains.

That is what makes travel medical insurance so important.  Traditional U.S. healthcare provides very limited benefits when an insured person leaves the country, therefore supplemental medical insurance is a must for anyone boarding a cruise ship destined outside of American waters.

Petersen International offers the most comprehensive of travel medical products.  For outbound U.S. residents, we have the USAway International Major Medical Plan which has been an evolving staple of the cruising industry for more than 25 years.  The plan provides the most robust medical benefits in the market including specialized aids like “emergency evacuation” and “repatriation of remains” as well as trip cancellation and accidental death benefits.

Next time your clients board a cruise ship, make certain they have taken the necessary precaution of acquiring the USAway International Major Medical Plan.  Policies can be purchased and issued today at www.piu.org.