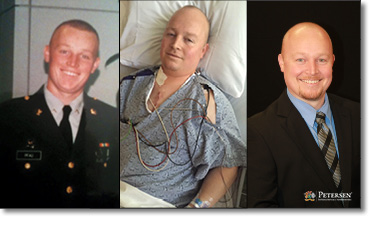 Derrick Pfau has been an associate at Petersen International for four years. He is a specialist in outside disability sales and the sports/athlete market. Before joining Petersen, Derrick served four years in the U.S. Army. He held the rank of specialist and trained as a paralegal in the JAG Corps. He was deployed, stationed in Germany and did a tour in Iraq. After an honorable discharge, Derrick sought further education at the University of California, Los Angeles, where he earned a bachelor’s degree. He then landed a sales job with Anheuser-Busch which eventually turned into a management position.

During a required physical examination, a nurse discovered what she thought was a heart murmur. It was after further testing that Derrick was diagnosed with the affliction of aortic regurgitation with a faulty heart valve. Doctors monitored his condition for three years during which time Derrick was offered and accepted a sales and marketing position at Petersen International Underwriters.

Over time, Derrick noticed slight changes in his medical condition culminating one afternoon over a Thanksgiving holiday weekend. He was playing with his two young daughters, throwing them in the air when he suddenly lost all of his breath and energy. He slumped to the ground, feeling like someone was standing on his chest. He could hardly breathe, but he slowly regained composure. He saw his doctor the very next morning who determined that surgical intervention was the only viable long-term solution.

The processing was fast-tracked by the hospital and within six weeks, Derrick was laying on an operating table undergoing open-heart surgery to replace his faulty heart valve with a bovine replica. The surgery was a success, but his recuperation was slow. The recovery took more than two months before he was able to safely return to a full-time work day. His colleagues and co-workers were all very happy to see him healthy and back at work.

But unbeknownst to many, Derrick’s ordeal took a great emotional, physical and financial toll on his young family. During the two month period of his disablement, Derrick’s mortgage payments, utilities, miscellaneous medical bills not covered by his health plan and the day-to-day expenses of a four person household put a huge strain on his family’s economic stability. Derrick’s short-term, employer-sponsored disability policy was quite helpful, but in reality, not enough. And like most Americans, Derrick had little in the way of a liquid savings, and was forced to take a loan from relatives.

Thankfully, Derrick and his family made it through those trying times which allowed him to see firsthand the importance and simple necessity of high-limit disability insurance. His tribulations have made him a true believer in and supporter of the DI industry.