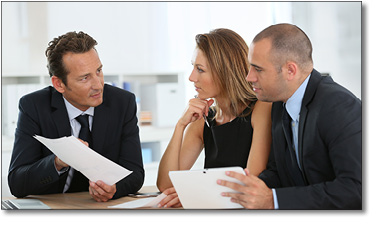 The following are words to instill in the American people to help them understand their financial needs so far as solving problems created by the “living of life.”  One of the important things that must be communicated to a prospect is that you, the producer, didn’t come there with problems to give to the prospect.  He/she had the problems before you got there.  You are there as a person who can help him/her identify those problems and to present to him/her some ideal solutions.

The living of life creates two distinct problems over which we have no control.  These are economic problems.  We’re born, we’ve got these problems.  All we can do is recognize them and try to neutralize them, but there is no way we can dodge them.  One is not more important than the other.

Problem number one is a dilemma that economists and insurance-minded people have referred to for nearly a century and a half.  It is the problem of “dead death.”  That’s where people are buried under the ground and removed from the face of the earth, never again to produce another dollar.  A business or a family (or both) suffers the financial loss of the income formerly produced by the income earner who passed.

There has been an obvious and tremendous need for something to replace that lost income.  That is the primary function of life insurance.  It is a substitution for the income that would have been produced had that income earner remained alive and at work.

Fixed in the minds of economists and students of insurance has been a corollary problem that has been tied to “dead death.”  That is the problem of getting too old to work and the economic consequences of being unable to produce income because the income earner is too feeble or senile.  It is with this thought in mind that life insurance cash values were perceived as a supplement to retirement funds and marketed in vast quantities.  Salespersons had a rather beautiful story to tell.  If you buy cash value life insurance from me, we take care of two situations: income replacement in the event of your premature demise during your income production years or in the sunset years of your life.  We fix it so that you have a continuing income supplemental of other retirement plans so that you can face your children as a bearer of gifts rather than as a burden of despair.

With those glorious words, the Americans have acquired trillions of dollars of life insurance protection.  For those that don’t subscribe to the life insurance cash value theory and prefer to buy term and invest the difference, there truly is no difference.  It is still a matter of trying to solve the primary need for income replacement in the event of “dead death” and the corollary problem of having accumulated something for the years of retirement through a side vehicle of mutual funds or real estate or some other investment.  Even though we have two different life insurance approaches, the problem of the “dead death” remains as it always has.

Problem number two is something economists and insurance professionals agree is a problem created by the very living of life which we refer to as “living death.”  That means getting sick or hurt and not being able to work for which a person is dead economically because an injured or sick man or woman cannot produce new income.  A consequential reality to the “living death” is the expense of recovery or getting well which can harbor tremendous costs – doctors, specialists, rehabilitation, pharmaceuticals, nurses and hospital expenses.

One must get well because as long as a person is lying in that bed, the world is passing him/her by, meanwhile the survival of that person is rapidly consuming everything that has been accumulated thus far without producing any new finances.  One must try to get out of that bed and try to get well in order to become productive once again.

Another statement for your clients who are wise enough to listen because you have something that is good for them to hear is in the form of a question: “Why do you need money when sick or injured?  Why does anyone need money when sick or hurt?”  So long as life’s monetary expenses don’t surpass generated income, the economic picture of life is not bad.

If we have an overage of income compared to expenses, we will have some discretionary income to do nice things, to purchase luxuries, to prepare for old age and emergencies.  There is a good chance a client of yours will have a brutal and very harsh awakening one day if he/she is ever involved with a period of disablement.  Statistics dictate that one out of three Americans will suffer a period of disability that lasts more than three months.  That is particularly consequential to the average American regardless of income.  Even high income earners are rudely awakened when they start putting the numbers together because they often find that they’re not adequately preparing for retirement and they were previously unaware.  Their lifestyles and habits of spending money leave little if any savings leftover.  For most, bankruptcy is only six weeks away according to Department of Labor statistics.

When a disability occurs due to an accident or an illness, a period of “living death” ensues.  What happens to earnings when this happens?  Income can conceivably carry-on for a short period of time, but it ultimately ends when a person is no longer productive.  If a benevolent employer is involved, the disabled employee may continue to receive a paycheck for a period, but few businesses can or will continue paying a disabled person for very long.  No business can stand the pressure of paying two salaries to get one job done.  The employer has to eventually hire a replacement for the disabled worker.

As a person’s income begins its decent to zero and as expenses stay level or most likely increase due to medical care costs not covered by health insurance, one’s savings or discretionary income suddenly becomes debt.  The opposite of savings takes place.  Now debt to modern day Americans isn’t frightening because we are a debt-oriented society.  We buy nearly everything on a debt basis.  We use credit cards to pay for almost everything including clothing and food, and we even buy our homes and automobiles on a mortgage/debt structure.  So debt doesn’t bother us and we learn to live with it.  We learn to use it.

Decades ago, debt was considered an economic sin.  Bankers and mortgagers were highly secretive and no one spoke publically about it. But that all changed when we moved from a cash society to a credit society in a very short period of time.

So most debt does not strike fear in the hearts of Americans except for debt from medical expenses.  People fear it instinctively because medical debt is uncontrollable.  As long as a person needs medical care and fights to stay alive, the debt situation will continue as a person’s life depends upon those health services.

When income surpasses expenses, the result is savings.  But when disability strikes income will drop and expenses will increase causing an unwanted deterioration in savings which ultimately leads to a debt structure.  So how does one avoid this catastrophe?  We place sturdy economic propellants in place to stimulate income and maintain a sustainable level of expenses.  This is accomplished through major medical insurance and personal disability insurance.  The medical insurance keeps one’s debt controllable while the income replacement from the disability coverage provides cash benefits for living expenses.

Disability insurance is a money miracle and we can help excite our clients rather than allowing them the attitude that what they are buying through us is just a piece of paper that’s going to be folded-up in a dark drawer someplace.  We need to continue to use stories like this to plainly show the need for disability insurance.  We need to make disablement and loss of one’s income relatable because it is a reality and an unfortunate possibility to every working American.