There Be Pirates Ahead! 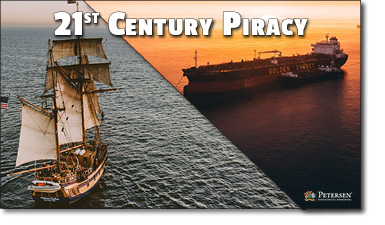 So says the disembodied animatronic skull of the famed Disney Pirates of the Caribbean theme park ride. The ominous cackle warns guests of the swashbuckling adventures they will soon encounter just as their boat plummets into the dark, cavernous depths of an imaginative world.

Most of us are familiar with the attraction, the subsequent live-action movie franchise starring Johnny Depp and the typical sights and sounds associated with the romanticized “golden age” of piracy and colonial privateerism that unfolded in Europe and the Americas throughout much of the seventeenth and eighteenth centuries. The “pirate” persona has become pop culture fodder including classic costumes for Halloween, yet the true face of piracy has significantly changed over the last 300 years.

Pirates are real and they still menace the oceans of the world. But instead of spreading terror along North American and European waterways, the pirates of today make their presence known mostly off the shores of Africa, the Middle East and Southeast Asia.

Current hotspots in Africa are the Gulf of Guinea along the west coast of the continent off of Nigeria and Gabon. The primary targets remain oil recovery service vessels, tankers and shipping container ships where the assailants seek to hijack the boats, holding their cargos and passengers hostage for ransom.

Economic gain without gratuitous violence is the usual modus operandi of these small, but organized bands of criminals. Yet, recently off the coasts of Yemen and Somalia, pure acts of terrorism have outnumbered acts for profit. Ships are commonly coming under small arms and mortar fire with no real sense of purpose other than senseless bloodshed against governmental and western influences.

In Southeast Asia, in the waters off the Philippines and Indonesia, criminal boardings of bulk carriers, tankers and fishing vessels are common with the intended result of kidnappings for ransom. Private yachts and tourists have also become susceptible targets of pirate gangs in the area.

Although the thought of coming under fire and being held in captivity by modern-day mercenaries is absolutely deplorable, the actual number of worldwide pirate-related incidents is on a general decline. Private armed security forces, modernized maritime operating procedures, local government cooperation as well as naval ship escorts through hazardous waters has led to safer commercial conditions, in recent years, for ship, cargo and crew.

Yet, numerous threats remain and safety isn’t a guarantee at this time. Additional safeguards can be taken, including high-limit accidental death insurance on merchant mariners, security personnel and civilian passengers. Also, kidnap and ransom insurance has proven incredibly effective in piracy incidents resulting in hostage situations over the last decade.

Contact Petersen International to learn more about the corporate and individual resources and insurance solutions available to those traveling anywhere in the world by ship or other means.