Tragedy at Five and a Half Miles Above Sea Level 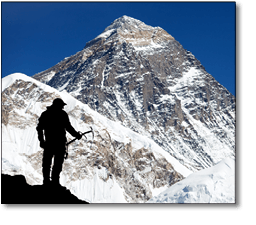 Since the first half of the twentieth century, about 7,000 people have attempted to climb the tallest peak in the world, and almost 300 of them have perished doing so.  In the high elevations of the Himalayas, death befalls climbers due to a number of different causes including altitude sickness, falls, avalanches and rope accidents.  The slopes of Mount Everest have proved deadly for many decades as brave adventurers put their bodies and wills to the ultimate test.  The 2016 climbing season recently came to an end, and it is reported that six people died on the mountain this year.

On May 21st, Eric Arnold, a Dutch climber, died on Mount Everest during his descent from the summit.  After achieving his childhood dream of reaching the top, the 36 year old tri-athlete apparently suffered a massive heart attack while resting in his tent.  Just a day later, Arnold’s climbing team lost another member.

Dr. Maria Strydom, a university lecturer from Melbourne, Australia, tragically passed due to the harsh conditions on Everest after failing to reach the summit.  She and her husband, both experienced climbers, decided to “take-on” Everest to prove to the world that living a vegan lifestyle does not translate to a lack of physical or mental strength.  She wanted to show people that vegans are strong individuals.

Just 15 minutes from reaching the top of the mountain, Dr. Strydom was forced to turn back due to the increasing effects of altitude sickness.  She later died in her husband’s arms at one of the high-elevation camps.  Greif-stricken, her husband was able to descend to a lower camp where he was safely evacuated by helicopter.  Fortunate for the devastated family, his wife’s body was later recovered from the mountain and transported back to Australia.

The saga of Mount Everest continues to add new chapters of triumph and tragedy as more climbers risk their lives each year in an attempt to reach the top of the world.  But the increasing numbers of deaths speak to the incredible dangers involved – dangers that can be financially mitigated with various forms of insurance.

Accidental death and dismemberment insurance as well as international travel medical insurance are both readily available products that can serve to financially indemnify the physical and economic risks taken by adventure seekers on their travels throughout the world.  Both policies include special benefits like emergency medical evacuation and repatriation of remains back to one’s home country.

Petersen International offers these and other important insurances including war and terrorism coverage for mountaineers on every continent.  Contact us at (800)345-8816 to learn more.