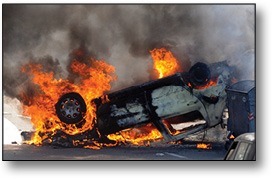 Although a culturally rich, diverse and historic part of our planet, for more than a millennia, the Middle East has been a breeding ground for terrorism, religious extremism and violence where social atrocities have become commonplace. The current political climate has remained scalding over the last several years, and with State Department analysts suggesting a continued strengthening of Islamic State forces in Syria and Iraq, we probably won’t see a cool-down period for some time.

But these outright dangerous conditions fail to keep thousands of Americans from making the area a temporary home. U.S. contractors, oil workers and missionaries flock to the Middle East for various reasons. Most risk their lives for larger paychecks, rebuilding infrastructure, seeking new oil deposits and expanding communications systems, while others travel to bring aid and security to local nationals struggling to survive in war-torn areas. Many world leaders have accused the U.S. of exploitation, but that has not kept American workers from traveling to that part of the world on a continuous basis since 9/11/2001.

Considering the physical risks involved while stationed or living in the Middle East, U.S. contractors and expats are in dire need of comprehensive disability, life, medical and kidnap/ransom insurances. Petersen International is the United States specialist in overseas life/health/contingency insurances for Americans working in hazardous locales such as the Middle East.

Traditional U.S. carriers refuse to insure contractors and missionaries residing in areas of conflict, but Petersen International is able to provide life, disability and medical insurances to Americans stationed in any dangerous part of the world including, but not limited to Iraq, Afghanistan and Syria.

Call us today at (800)345-8816 to learn why Petersen International Underwriters is the premier provider of international life and health insurances and how we can financially protect your clients who may be living or traveling outside the U.S.