Some Thoughts on Thanksgiving 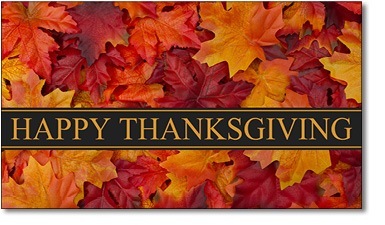 Later this week, we celebrate Thanksgiving – a time to spend with family to reflect upon our lives and lend appreciation to our nation’s humble beginnings, marveling at how far we have come.  Tradition dictates that we admire that first autumnal feast of 1621 and the early Plymouth, Massachusetts settlers whom we now recognize as Pilgrims.

The debated mistreatment of Native Americans by the Plymouth Colony has in recent years tarnished the storied reputation of those Puritans who reached the New World in November of 1620.  Like the often vilified Christopher Columbus, the Pilgrim story, under the guise of political correctness, has lost some of its luster since I was a child.  Society has become more forthright about the atrocities that have historically plagued native populations in America.

Nevertheless, one must respect the dedication and bravery of those early settlers to venture into the relatively unknown and undergo such a dangerous journey across the Atlantic in pursuit of religious freedom almost four centuries ago.  They weren’t daring young explorers, nor were they well-equipped or promised riches and fame by sponsoring governments.  They were modest men, women and children, simply searching for a place to live without threat of constant persecution, free to begin anew.

The Pilgrims pioneered bartering and trading methodologies among other settlements of Europeans and native tribes alike in a sparsely populated land that would eventually be called the United States.  Their fear, their fortitude, their ingenuity birthed many aspects of our modern capitalistic way of life.

We must remember those who came before us, and learn from their triumphs and their mistakes.

Those of us at Petersen International wish you a Happy Thanksgiving.

Like many Americans and I would guess some of you, I have a tendency to eat more than I should, and I definitely don’t exercise enough.  By Southern California standards, I’m not the poster boy for health and fitness.  But like many of your clients, I work hard and I earn an income that requires appropriate coverage against the financially catastrophic perils of disablement.

Your clients, like me, must have their earnings properly insured so as to provide the consistent funds necessary to care for themselves and loved ones in case of a long term sickness or debilitating accident.  Personal disability insurance is the cornerstone of any balanced, sound financial plan, regardless of age or socioeconomic background. Read More

Open enrollment for state healthcare exchange platforms commenced across the country on November 1st.  For the next three months, the medical insurance market will undergo a frenzy of Americans shopping health plans, switching carriers and even some that will forego coverage altogether at the risk of financial penalty, let alone the obvious hazards of living uninsured.

In fact, millions of Americans still fall through the ACA cracks and are unable to secure affordable healthcare, thus the need for gap coverage…thus the need for short-term medical insurance.  Several carriers entertain the growing short-term medical market with confusing and often limiting product lines, but Petersen International has developed a short-term program that offers the most attractive, easy-to-follow benefits in the nation. Read More